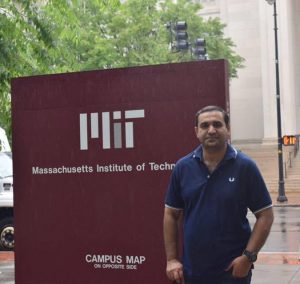 Cyberwarfare: Who Needs a Gun when you have a Keyboard?

Haider Abbas is heading the R&D Department at College of Signals, National University of Sciences and Technology (NUST), Pakistan. He is the founder and director of National Cyber Security Auditing and Evaluation Lab (NCSAEL) at NUST. Dr. Abbas is a Cyber Security professional, academician, researcher and industry consultant who took professional trainings and certifications from Massachusetts Institute of Technology (MIT), United States; Stockholm University, Sweden; Stockholm School of Entrepreneurship, Sweden; IBM, USA and Certified Ethical Hacker from EC-Council. He received his MS in Engineering and Management of Information Systems (2006) and PhD in Information Security (2010) from KTH- Royal Institute of Technology, Sweden.

Dr. Abbas has received several research grants for ICT related projects from various research funding authorities and has been working on scientific projects in US, EU, KSA and Pakistan. His professional services include – but are not limited to – Journal Editorships, Industry Consultations, Workshops Chair, Technical Program Committee Member, Invited/Keynote Speaker and reviewer for several international journals and conferences. He has authored over 130 scientific research articles in prestigious international journals and conferences. He is the principal/foreign advisor for several graduate and doctoral students at Florida Institute of Technology, United States, Manchester Metropolitan University, United Kingdom, National University of Sciences and Technology, Pakistan, King Saud University, KSA, and Al-Farabi Kazakh National University, Kazakhstan.

Dr. Abbas has received many awards from National and International organizations. He has been declared Overall NUST University Best Researcher for 2017-2018 among all NUST constituent Colleges and Schools across Pakistan. Some of the significant awards include Research Productivity Award from Pakistan Council for Science and Technology, Best researcher award from MCS, NUST, CyberPatriot from US Airforce Association, USA and Research Excellence from COEIA, KSA. Also, in recognition of Dr. Abbas services to the international research community and excellence in professional standing, he has been awarded one of the youngest Fellows of The Institution of Engineering and Technology (IET) UK; a Fellow of The British Computer Society (BCS), UK and a Fellow of The Institute of Science and Technology, UK. He has also been elected to the grade of Senior Member of Institute of Electrical and Electronics Engineers (IEEE), USA. He has been appointed as Member of the Board of Governors for National Information Technology Board (NITB), Govt. of Pakistan.

With the increasing reliance of governments on technology, the internet landscape has become a battlefield. Cyber warfare has become a dominant threat to governments and business industries. The primary purpose of cyber warfare is to weaken or destroy a nation and its critical infrastructure causing damage to the state including loss of life. The destructive weapons were once thought of as only physical entities may they be chemical, nuclear, or biological weapons. However, in the present threat scenario, as everything from transport networks to financial services relies on technology, catastrophic damage can also be caused with a few lines of code. The ability of hackers to plant malware in a system diminishes the value of having physical weapons. The talk shall cover different types of cyber warfare attacks and some historical examples of such operations followed by suggestions on combating cyber warfare.